Too much stress IS unhealthy! But choosing relaxing and fun whenever you feel like it has bad results. So how do you apply this whole balance idea?

Henry is in 11th grade. He has homework to do every night and will have to start working on his college applications soon. Should Henry “buckle down” and push himself to work harder? Or should he relax a little and take things easy?

The correct answer is… it depends.

What does it depend on? It depends on the context—the factors happening around Henry and his work. For example:

So how can Henry decide what to do? Let’s help him… 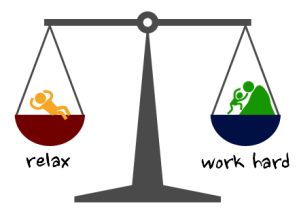 Let’s help Henry make a decision by looking at a recent Balance Challenge post on the balance between relaxing and working hard.

The visual we used to understand this balance is the scale.

For more details on these elements, see the Balance Breakdown page.

Another helpful image to use to make this concept more concrete is the slider:

So how can the slider help Henry decide whether to “take it easy” or “buckle down”?

Remember the context questions we asked earlier? Where to position the slider all comes down to answering those questions.

Well, maybe in this context, it would help Henry to work a bit harder. His grades aren’t terrible, but he has time, he isn’t too stressed out and people are giving him reminders to work harder. Maybe he could move to around 75% hard work:

That might mean spending another 45 minutes on homework at night, checking his homework for accuracy before turning it in, and setting up a schedule to start working on his college applications.

But what if Henry’s context were quite different?

In this context, it sounds like it would help Henry to relax quite a lot. Maybe he should be at 90% relax ~ 10% work hard:

For Henry in this case, it could mean he goes to bed 30 minutes earlier—even if not everything has been triple checked—and he could go for a walk after school to calm down and think things through. It doesn’t mean abandoning all his work, but it does mean he should relax a lot more than he is now.

My hope is that the Balance Challenge provides a framework for thinking about social decision-making. But it may be too abstract for some. I’d like for this to be something understandable, concrete, and ultimately, actionable.

Achieving balance is all about finding a good position on the slider—one that will be helpful to you to get a result you’re happy with. And it all depends on the context: what’s going on around you?

Using the slider to put the Balance Challenge in Action! should help people not only figure out how to think about a situation, but also how to act.

As always, I appreciate any feedback. Tweet or leave a comment and let me know what you think. Thanks!

For an explanation of the Balance Challenge framework, see Balance Breakdown, always accessible on the top navigation bar.