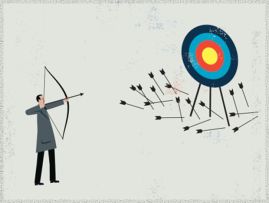 If at first you don’t fail, then fail, fail again

The discussion around failure in education is often a contentious one. What is a teacher to do when a student fails to meet expectations? Educators have strong feelings about whether failing students sends a message and builds character, or sets them up for a vicious cycle of continued failure.

On the one hand, teachers cannot give constant extensions and extra credit, lest students come to expect these exceptions always be made. As noted in Edutopia’s When Helping Hurts, doing so may “raise a risk-averse generation whose members lack resilience and the crucial ability to rebound from failure.” The argument is that it’s enabling to cut students slack if they perform poorly—they have to work hard and rebound from failure as practice for the real world.

On the other side of the argument, many argue that experiencing failure does not prepare students for life after school. According to the Washington Post’s Jay Mathews:

There is virtually no research or evidence to suggest that higher incidents of failure in school produce higher levels of responsibility, greater academic achievement in college, or a higher likelihood of success in meeting the demands of adult life.

We may want kids to rebound from failure, but that doesn’t mean it’s usually going to happen…  studies find that when kids fail, they tend to construct an image of themselves as incompetent and even helpless, which leads to more failure.

—Do kids really learn from failure? Why conventional wisdom may be wrong

Teachers on this side of the argument say that students who are doing poorly in school need support, not a failing grade.

This debate is an extension of the argument from a prior post on the balance of providing support and encouraging independence:

As with other Balance Challenges, there are two opposing stances that—when taken to their extremes—can be detrimental.

On the fail students to teach them responsibility side, defaulting to failing students can have the opposite of the desired effect: disengaged students who don’t bother trying because they expect to fail. It also absolves teachers of the need to figure out how to support students and teach the skills that may help them succeed.

And on the failure is not an option side, not holding students accountable can run the risk of enabling them, teaching them that someone will always be there to solve their problems.

So what’s a teacher to do? Strike a balance.

It’s easier said than done, but essentially it comes down to:

What does this mean regarding failure specifically?

A Matter of Mindset?

There is a lot of focus lately on ideas like growth mindset, and teaching grit and resilience, and there is much these concepts can add to this discussion of failure. However, educators have to be careful not to take any one of these ideas to their extreme, either: just about any advice taken without balance can have negative effects like those discussed here.

And it’s particularly important to challenge our assumptions about the ideas of responsibility and grit in general, for many of the students in our classrooms. We have to ask ourselves, is it reasonable to expect students who live in poverty, are homeless, or experience other forms of trauma to rebound from failure the same way students not living in these circumstances? According to Aisha Sultan in When grit isn’t enough, “the conversation about growth mindsets has to happen in a social and cultural context.”

This provides yet another example of the need to avoid blanket declarations, and that we must carefully consider context to achieve balance in our pedagogy.