You’re working with a group of people, and there’s a long discussion about the best way to solve a problem. One person wants A, another person wants B, a third person wants C… but you know the best option: it’s Z! It’s so obvious! You think to yourself, It would be SO much easier and faster if everyone just listened to my idea!

Everyone has ideas and thoughts and reactions. And we usually think our ideas are the right ones, the best ones, the ones that make the most sense. Trouble is, other people are probably thinking the same thing!

This is just one of several things to consider when deciding whether or not to share your idea with the group. As with many things, a good way to inform that decision is to find a balance!

Sometimes people say “a penny for your thoughts.” That’s a reminder to share what you’re thinking. And other times people advise, “less is more” – that might make you think you shouldn’t say so much. So which is it? Let’s look at the extremes of both sides. 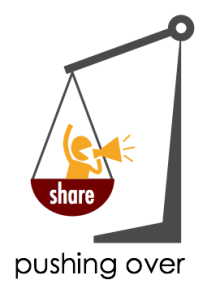 You might have a large number of very good ideas. Those ideas may even be genuinely better than the other people in your class or meeting. Still, if you share your thought too much, you will likely not get the outcome you hope for.

When people share every thought they have (or rather, they share their thoughts every time they want to), people may tire of hearing from them. If you share your thoughts regularly people may start to tune out. It’s almost like people have a maximum capacity for hearing from one person. Then you don’t accomplish your goal, which is likely to be heard.

People sometimes make the judgement that those who share their thoughts too much of the time are “pushing other people over.” It implies that the person prevents other people from doing what they’d like to do.

If you only hold your thought 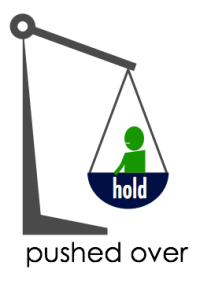 On the other extreme, if you only hold your thought and never share, people don’t have any opportunity to hear your take, your side. That can lead to being ignored, which many people don’t like.

It can also result in people getting upset. In many groups, there’s an expectation that everyone contributes. When one person doesn’t contribute thoughts and ideas, others may think they’re not pulling their weight (doing their fair share).

People sometimes think of those who don’t ever share their thoughts as being a “push-over.” It means others are in control and making decisions, and people generally want to avoid being characterized that way.

How much is a reasonable about to share depends on the context. These are some ways to think about :

There are also certain times and places that determine how much to share or hold your thoughts. Here’s a really nice example of this balance from a school setting. Rachel Rochlin, a 5th grade teacher in East Harlem, New York City, made these terrific posters to help her students think through when it’s a good time to share or hold thoughts in school:

The specific times may be different in your school or workplace, but it may be a helpful start to make two lists like these. You can get help or feedback from a trusted source, like a teacher you are close to (someone who you feel like understands you and takes the time to work with you).

WHO is sharing thoughts?

Not that it wasn’t complex enough already, sharing and holding thoughts can be further complicated by other aspects of people’s identity, aspects of what makes them who they are.

Gender plays a big role in who typically shares and holds their thoughts in group discussions. Boys and men often share whenever they feel they have something to say, while girls and women tend to hold their thoughts if others are speaking frequently. I’ve been called out on this in college classes and it was surprising and hard to hear, but important for me to think about. It led to me holding my thoughts more frequently to give female classmates more space to contribute.

This is not universal! Not all males share thoughts too much, and not all females hold thoughts too much. But boys/men should think, Am I sharing so much that some girls/women in my group don’t feel like they have an opportunity?

There’s lots to think about. I’m curious what you think. On which side of the balance do you tend to fall? Use the poll below to share your thought… about how much you share you thoughts!

For an explanation of the Balance Challenge framework, see Balance Breakdown, always accessible on the top navigation bar.